Students taking Greek 230 in the Spring Semester of 2012 will be reading the essay on the history and workings of Athenian Democracy as described in a text by Aristotle, or a student of Aristotle, the Ἀθηναίων Πολιτεία, The Constitution of the Athenians. In addition to studying the language of this 4th Century BCE text, and the political history it describes, they will be working with a true primary source, reading directly from the papyrus fragments that are the only surviving witnesses to this fundamentally important text.
The papyrus is P. Lond. 131, now at the British Library and formerly in the collection of the British Museum; it was purchased for the Museum in 1888, and F.G. Kenyon identified it as the Ath.Pol. in 1890. He announced his discovery in The Times of London on January 19 of 1891—the announcement ran on page 9. Kenyon published a first edition of the text in 1891.

With funding from the National Science Foundation (Grant  No. EAGER-1041949), we were able to collaborate with the British Library to take new digital photographs of the five  papyrus fragments, which range in length from three feet to five feet long. These photographs will be used as test-data for new methods of automated analysis of Greek scribal hands, using techniques developed at the National Technical University of Athens by Dr. Constantin Papapodysseus and his research team. In addition, they will provide a unique opportunity for Furman undergraduates to create a new digital edition of this priceless text. 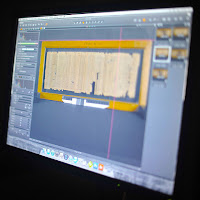 The photography took place on November 14, 2011 at the British Library. The images will go into the BL’s digital collection of Greek Manuscript data, but Furman University will enjoy an open-content license to use them freely and to share the fruits of our use with other students and scholars. We are deeply grateful to the entire staff of the British Library, and particularly to the experts in Preservation, Photography, and Curation who worked hard on this project.

Today, November 15, 2011, we are photographing the Bankes Homer, a 9-foot long papyrus fragment of Book 24 of the Iliad. This will become part of the Homer Multitext, Casey Dué and Mary Ebbott, edd.

Further updates on this work will appear here!
Posted by Christopher W. Blackwell at 4:09 AM